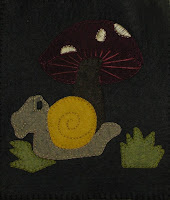 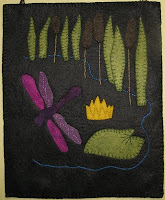 So the last month has been pretty hectic. Shows every weekend plus trying to get other commitments done. But thankfully it is the last day of November. No more shows booked for the rest of the year.
Here are a couple of small wool wallhangings I got done amongst all the bustle.
So now I need to complete two commissioned jackets, one commissioned scarf, and complete an order for some hats for a children's store. I shall have to double check my lists and orders to make sure that is it. But I think that is all.
Otherwise I need to restock some things for myself, such as cookies, aprons, muffins, tea cups plus get some samples done for the upcoming workshops in the New Year. Oh yes the other goal that keeps getting shuffled is to get some things posted for sale on my ArtFire store. So list making time once again to try to remain focused. Really need to convince munchkin to model some of my new hats and clothes. She hasn't been the most cooperative in that department lately.
All in all I am really looking forward to December.
Posted by Ingrid at 1:34 PM No comments: 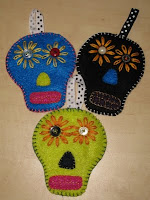 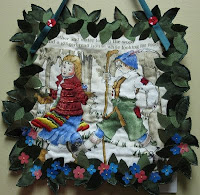 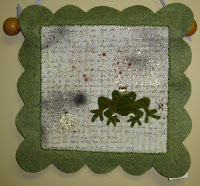 SO I have been working on a variety of smaller items that would be much easier to ship, partly because they are light. So many of the things I create are awkward, heavy and sometimes breakable.
Day Of the Dead images have long been a fascination of mine. This round of them was started from some swaps I had signed up for on Swap-bot. Also the fact that I have been cleaning my studio(very gradually), and have been finding treasures(aka half finished things). One of the next things on my list are to finish the three wallhangings I rediscovered that are DOD.
Fairy tales have also long been a fascination, I have been collecting books my whole life. I love the older versions. So may of them have been watered down by taking out all the bad parts. Which were kinda the point as they were meant to teach the younger generation the perils of life. The illustrations are also awesome.
Frog Prince is one of a series I started that is the story written on the background fabric with imagery from the story added. The Hansel & Gretal piece was inspired by some wonderful panels I discovered at a local quilt shop. Some of the fabric panels for books that are available are so wonderful. I am drawn to them but never want to use them as is. They just need embellishments and such added.

Posted by Ingrid at 6:07 AM No comments:

So life is getting ahead of me again. Obviously cause I have not been keeping up with this. So I guess I need to keep myself to some stricter schedules. List time again with time frames. Now I just need to teach myself to follow them.
This month is going to be very hectic, so I am presently looking forward to the first day of December. This weekend is going to be a big attempt to get caught up on some stuff I wish to complete. Must make every effort not to get distracted. ;) I'll let you know how it goes.
Posted by Ingrid at 4:17 PM No comments:

Ingrid
I'm a fashion graduate who has worked in most fields of the fashion world, from mannequin modeling and dresser to design and production. My main focus in the last five years has been undergarments and swimwear. I have taken various speciality courses in the making of bras and the fitting of bras. One of the main things that was reconfirmed to me is that no two bodies are exactly alike. This has resulted in me doing many custom alterations of many styles and brands. During this time I also worked in a swimsuit/bra store for a couple of years doing fittings and any necessary alterations. Throughout my life an important part has always been expanding my knowledge and techniques. We can always learn something new. 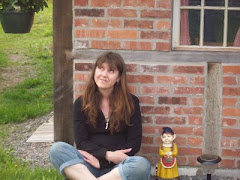